Pre-exposure prophylaxis (PrEP) is a single pill taken daily which prevents HIV acquisition. PrEP is a promising intervention to help reduce new infections and was approved in 2012 by the Food and Drug Administration (FDA) for this purpose 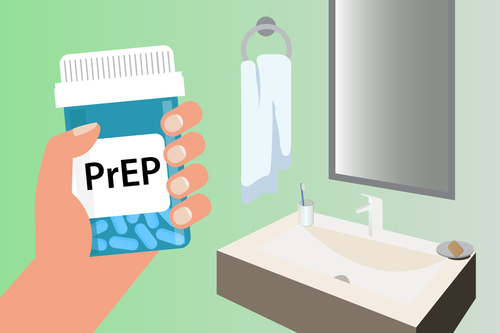 Pre-exposure prophylaxis (PrEP) is a single pill taken daily which prevents HIV acquisition. The medication used for PrEP is a combination antiretroviral known as tenofovir/emtricitabine. PrEP is a promising intervention to help reduce new infections and was approved in 2012 by the Food and Drug Administration (FDA) for this purpose. However, since approval, PrEP use has been limited by several different factors, including low awareness in the community, cost of the medication, and concerns among providers that people on PrEP may stop using condoms.

The Rhode Island STD Clinic works closely with the Department of Health and operates out of The Miriam Hospital Immunology Center, the major HIV outpatient center in the state providing care to over 75% of the state’s HIV positive population. This is the only publicly funded STD clinic in the state and provides safety net services to a variety of racial, ethnic, and sexual minority groups. Over one-third of the clinic’s population are MSM. Like in many places across the country, the majority of new HIV cases in Rhode Island are among MSM. As of 2013, all MSM receiving care at the STD clinic are offered a brief educational session about PrEP by clinic staff. All MSM are educated regardless of risk factors in order to disseminate awareness about PrEP in the community. STD clinic patients who are interested in PrEP are referred to the onsite PrEP Program, which also receives referrals from other community organizations, outpatient physicians, and current patients who are PrEP.

Though cost is a barrier to PrEP in many places across the country, Rhode Island is a Medicaid expansion state and cost has not been a major issue. Most patients are insured, and in our PrEP Program so far, all insurers have covered the cost of the medication. Gilead, the manufacturer of the drug currently used for PrEP, also offers a medication assistance program that covers co-pays for the medication. The largest cost barrier has actually been deductibles and co-pays for physician time and laboratory monitoring. At the Immunology Center, these concerns have been mitigated by close follow-up with patients and presence of an onsite financial advocate which helps to navigate the insurance process.

Many have also cited concerns that people on PrEP may start having more sex or stop using condoms, a phenomenon known as “risk compensation.” Anecdotally, people on PrEP in Rhode Island have not changed their behaviors; people who used condoms before continue to do so and vice versa. There have been reports in the media about an increase in rates of other STDs, but in Rhode Island, we have not seen a large spike in STDs among people on PrEP. People on PrEP are recommended to follow up every three months while on the medication. At each visit, providers routinely screen for STDs. PrEP does not protect against other STDs (such as syphilis, gonorrhea, and chlamydia) and this is something that patients on PrEP should be warned about.

Another major concern has been adherence to the medication. In early studies performed in Africa (e.g. VOICE and FEM-PrEP), people did not take the medication even though they showed up for medical care. These studies compared PrEP to a placebo. In the “real-world” clinical setting, we have found that people who don’t take the medicine simply don’t show up for appointments. Given this, a main concern becomes retention in PrEP care as well as adherence. In Rhode Island, approximately 25% of people who are prescribed PrEP are lost to care six months after initiating PrEP. Similar to the HIV care cascade, retention in PrEP care will be important to monitor.

Two additional barriers have prevented widespread implementation of PrEP in our community specifically. The first is risk perception: on an individual level, many MSM who are at high risk of HIV do not perceive themselves to be. This has been observed in people who do not get routinely tested for HIV and continues to be a major barrier for HIV prevention. We had one patient present to the STD clinic who reported over 100 partners in the past year with inconsistent condom use. He was HIV negative, and when we were discussing his risk for HIV, he indicated that he believed he was at low risk. After some counseling, we started him on PrEP. We have tried to overcome this barrier with risk counseling and education by our STD clinic staff, but low HIV risk perception continues to be a major limiting factor in PrEP uptake.

The second main barrier to widespread PrEP implementation in our community is reluctance by primary care physicians (PCPs) to prescribe the medication. PrEP is an antiretroviral that can also be used to treat HIV in combination with other medications. Many PCPs are unfamiliar with prescribing antiretrovirals, and this is compounded by the notion that most of these drugs have significant side effects and monitoring requirements. Many infectious diseases specialists are also hesitant to prescribe the medication to HIV negative individuals. In order for widespread PrEP uptake, PCPs must be willing to prescribe the medication. To that end, PCPs must be comfortable obtaining a sexual history and identifying individuals who are at risk of HIV infection. In Rhode Island, there are few PCPs who are prescribing PrEP. I hear many stories from my current PrEP patients about how their PCP refused them PrEP, or told them only to use condoms. In order for PrEP to be successful, we need to overcome some of our own biases and hesitations and have open and honest discussion about sexuality.

Overall, PrEP uptake is improving across the United States. Much of this has been driven by the MSM community and key physicians and other supporters in each state. Much more needs to be done, including engaging PCPs and other healthcare providers in the community. The local infrastructure must exist to cover the cost of PrEP care and medications for those who are under- or uninsured. We need to educate medical providers and members of the community, not only about PrEP, but also about how to appropriately address sexuality.

PrEP has the potential to dramatically reduce the number of new HIV infections, but needs to align with improvements in sexual health education and other HIV prevention approaches.