Focus groups were performed with black MSM enrolled in pre-exposure prophylaxis (PrEP) to determine their thoughts about condom use and STDs, with the goal of helping to inform the national conversation about condom and STD prevention messages that work for this population. Here are the findings. 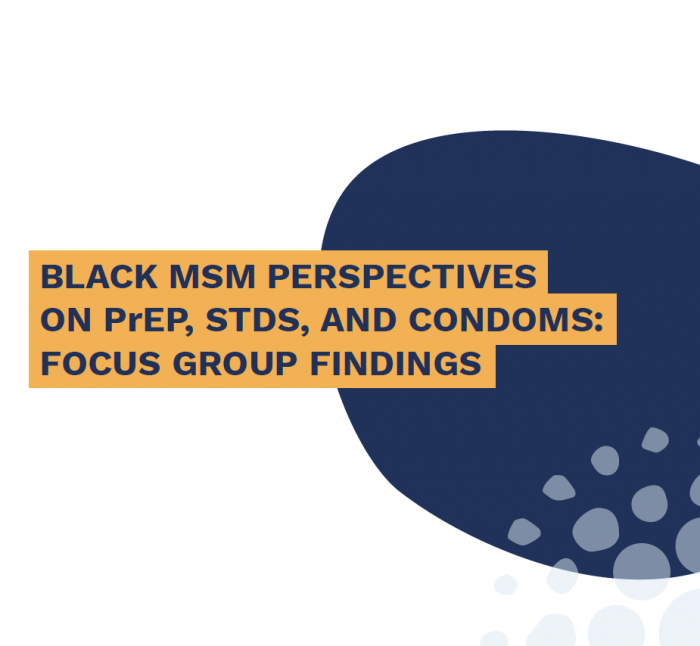 The National Coalition of STD Directors (NCSD) is concerned about the disproportionate impact of sexually transmitted diseases among men who have sex with men (MSM) and is actively working to address these disparities. As part of this work, we sought to better understand what black MSM enrolled in pre-exposure prophylaxis (PrEP) think about condom use and STDs, with the goal of helping to inform the national conversation about condom and STD prevention messages that work for this population. With support from the MAC AIDS Fund (MAF), we conducted three focus groups in 2017 with black MSM on PrEP—in Detroit, Michigan; Durham, North Carolina; and Washington, D.C. This report was then developed and published with the support of Gilead Sciences, Inc.

Focus group participants clearly understand that PrEP is intended to prevent HIV and does not prevent other STDs. Nonetheless, some participants do not use condoms and are willing to accept the risk of STDs. Condom use is influenced by numerous factors unrelated to PrEP, such as relationship status, trust, drug or alcohol use, salience of STD risk, and feelings of sexual desire, pleasure, and intimacy.

PrEP contributes to STD-protective and STD-risk behaviors. For some participants, PrEP is associated with an increased number of sexual partners, more frequent sex, reduced condom use, and decreased stress about not using condoms. Some reported no change in their sex or condom-use behaviors. Some said that PrEP heightens their attention to risk reduction, including STD prevention. In addition, some participants reported that disclosing that they were on PrEP helped to facilitate conversations with their sex partners about risk and condoms.

Perceptions about the relative severity of STDs and HIV influence attitudes about condoms. Some participants, given their preference not to use condoms, feel that STDs are an acceptable risk because many are curable. Some also described how negative results on their routine HIV and STD tests contributed to a sense of invincibility that rationalizes their choice not to use condoms. Others, however, reported that they use condoms with PrEP because they are concerned about STDs—often in the larger context of a decision to start PrEP to enhance their overall sexual health.

Focus group participants offered ideas for persuasive messages about condoms, but discouraged proselytizing. Those who did not use condoms before starting PrEP may be less receptive to messages about using condoms while on PrEP. Participants favored messages that present the facts about PrEP and STDs with subtle encouragements about condoms—an approach that supports individual decision-making in the context of relationships, health, and pleasure

Focus group participants disagreed about if and how STD and condom messages should be tailored for the black MSM community. Many emphasized the diversity of the community and offered conflicting opinions about the characteristics of the most effective spokespersons. Given concerns that community members sometimes confuse PrEP with HIV treatment, participants discouraged the use of spokespersons with known HIV-positive status, especially those who have previously appeared in HIV testing and treatment-related campaigns. Some rejected the premise of tailoring to the black MSM community, thinking that doing so promotes a narrow view of how gay men define themselves and might be seen as complicit in the history of pathologizing gay sex in the context of HIV.

Focus group participants also offered numerous suggestions about the communication channels through which messages should be disseminated, recommending both MSM-specific and more general social media platforms—such as dating sites and apps, Facebook and Instagram, and streaming services such as YouTube—as well as more traditional formats such as billboards and bus placards. Participants also pointed to the important role of television sitcoms in presenting an informed depiction of HIV and suggested incorporating messages about PrEP, STDs, and condoms as way to leverage the influence of mainstream popular culture.

Messages around condoms should be tailored to accommodate variation within the population of black MSM on PrEP with regard to attitudes and behaviors around condoms and STD risk. For example, black MSM who conceptualize PrEP as part of a broader approach to personal wellness may respond best to messages that frame the choice to use condoms as consistent with those personal wellness goals. Messaging can also promote the idea that disclosure around PrEP with sexual partners may help to initiate conversations about STD risk. In contrast, black MSM on PrEP who were disinclined to use condoms before starting PrEP may benefit more from messages designed to shift attitudes about condoms from pre-contemplation to contemplation of condom use. Messaging also should counter the possibility that repeated negative results on routine HIV and STD testing could cultivate a sense of invincibility that reduces the likelihood of condom use. Lastly, for all black MSM, messaging should present condoms as a choice; that is, part of a flexible menu of STD risk reduction options and not as a behavioral mandate.

Health departments, federal agencies, nonprofit organizations, advocates, and industry partners must develop and disseminate effective messages for black MSM about PrEP, STDs, and condom use—messages that are carefully crafted to avoid the pitfalls described in this report. The complexity of the issues and the diversity of attitudes and behaviors within the black MSM population, as evidenced in these focus groups, challenge programs seeking to develop messages that can be broadcast to large audiences. Social media platforms present a unique, but underused, opportunity to tailor messaging to inform users with different perspectives—in ways that will resonate with them—about the costs and benefits of different sexual health strategies (Gabarron & Wynn, 2016; Wohlfeiler, 2018).

Although effective messaging plays an essential role in STD prevention for black MSM on PrEP, messaging by itself will not reduce STD transmission. Beyond behavioral and biomedical interventions, public health must also address the social determinants of health that drive transmission, such as racism, homophobia, MSM stigma, poverty, and access to high quality sexual health care.

PrEPared to Support Women and Their Sexual Health Webinar Series

Fighting the Syphilis and HIV Epidemics: Voices from the Field